Today was a very busy day in the garden, in 33 degree dry heat.

I arose at about 0700 (yes I slept in), and tended to the chooks. I was so tired, that I jumped back into bed until 0800. I got up again, went to Aldi to get 36 cartons of UHT skimmed milk for our stockpile. In the mean time Kim cooked me up two eggs (one was a double-yoker), two rashers of bacon, some skinheads on a raft, and a few mushrooms, all washed down with a cup of rooiboss tea and a glass of orange juice. Just what the doctor ordered, and I am glad we have this ritual once a week.

At about 1030, I had to make a trip to Sydenham, which is about 30 minutes drive away, to pick up two ceiling fans for Kim’s office and Ben’s bedroom. They are the only rooms left (besides my study) that do not have fans. This year, we intend to reduce our air-conditioning usage considerably. At $250, the fans will pay for themselves in no time compared to the energy usage from energy inefficient air-con!

At about 1130, I returned home and started in the garden. First, I mucked out the chicken coop, putting most of the manure into the compost bin. I left most of the dry bedding in the wheelbarrow, which I left in the sun. Tomorrow, any poo that I missed will be dry, and I will use it as mulch for the garden beds. As the girls had all laid an egg for the day, it was safe to let them free range for an hour or so while I pottered around.

Next I made sure that the seedlings were OK, and had to water them again. Thank goodness that I am planting them all out tomorrow. I am sick of watering them every day. With a good mulching, I can leave them for at least two days before I have to water again. The broad beans are so tall that most of them have fallen over, even though we propped most of them up with stakes and string. I will be picking most of the pods tomorrow, and pulling all the stalks. They are near the end of their time and the lower leaves are going brown because of the heat. After watering a few pot plants as well, it was time for the chookies to go back in their coop. They did not want to go back in, because they were having such a great time scratching around under the plum tree. I had to go under the tree and shoo them towards Kim. Unfortunately, I forgot that Kim had never picked up a chicken before, so the chooks just ran back towards me, with Kim squealing at the the chooks. It was so funny, yet frustrating at the same time. Eventually we got them all back in after about 10 minutes of mucking around. All for a 2 metre trip back to their coop!

Then it was time for a rest, as I was sweating profusely by now and my back was getting a little sore. After lunch (left over spaghetti & meatballs, yum!) and a lay down for an hour, it was back out into the heat and I started clearing the pea patch. The jalapeño chilli bush is still going strong in that bed, so I left it well along. During the process of clearing the spent pea plants, I discovered why it is doing well. It was about two months ago, I noticed that the bed was lacking in soil structure, with it mostly being compost, potting mix and straw. It just was not holding water long enough, and was getting consistently dried out. I decided to place some of the local soil, which is clay, on top of the garden bed, with a view to turning it all over when I pulled out the chilli bush. Well as luck would have it, the clay went a bit hard on top, but underneath, the compost mix stayed very moist and therefore the chilli bush is thriving with new leaves and flowers! So after I cleared the mostly dead pea plants, leaving the roots intact, I decided to add a layer of clay on top of the entire bed. It took a lot of digging, and breaking up of some big dirt clods, but after about 45 very sweaty minutes the entire bed was covered with a 10cm layer of clay. I then watered this in with two watering cans of rain water. Here are a couple of photos of my efforts. I also cut up any green pea plants and buried them under the clay to rot down, to add nutrients to the soil. 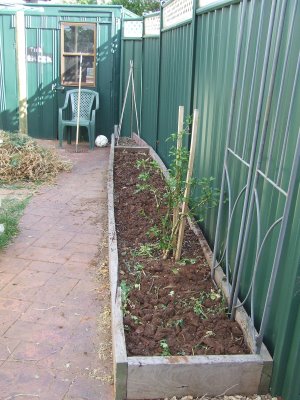 Tomorrow I will check to see if my crazy experiment worked. If the clay is dry, but the compost is wet, I will mulch with the chicken bedding I removed today, and then I will plant out the silverbeet and some spring onion seedlings into that bed. I better put a border of chicken wire up to keep the silly chooks out of the bed. 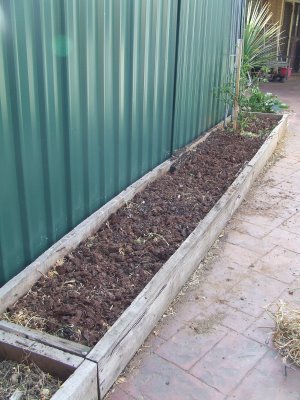 After that big effort, I was spent. It was now about 1700 and time for a shower. I looked like I had just had a workout in the gym. I believe it was better than a gym workout, and far more productive!

It was then time for a BBQ, as it was far too hot to cook in the kitchen. Sausages in bread was about as good as it got at this late stage, and we had some home made pickled onions and dill cucumbers on the side with a little bit of tasty cheese, tomato and olives. Just like a ploughman’s lunch with a banger! Very nice indeed.

So, here I sit totally knackered and we have another big day of planting to do tomorrow. With three beds to clear, prepare, and plant, it will be an early start and another busy day in the garden. Kim is also going to get up early and give me a hand. Wish us luck!