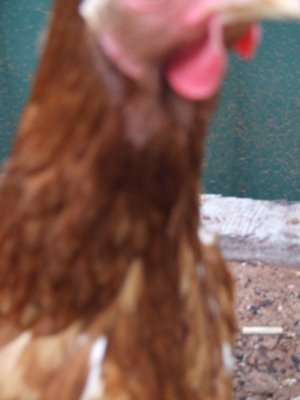 This afternoon, upon completion of a slow days work, I decided it was high time to spend a little quality time with the girls. And if you are thinking about my daughters, you can stop right there. I am talking about the feathered girls!

Ben and I thought it would be a good idea to let the chooks free range around the only patch of grass we have left. Cautiously we opened the gate to their run, and slowly but surely the girls started to explore a new part of their world. Bunty lead the charge, and two duly followed in her bold footsteps. They all made a bee-line for my dwarf apple tree that is just flowering, so after a bit of shooing, I led them down the path to the grass area. 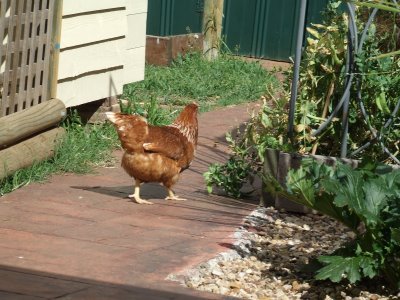 Ginger was very stubborn and would not leave the run, so I had to go back for her. I was determined that no-one got left behind, on this, their first outing. I could not coax her out of the run, so I had to carry her to where the others had found the nice, juicy grass. 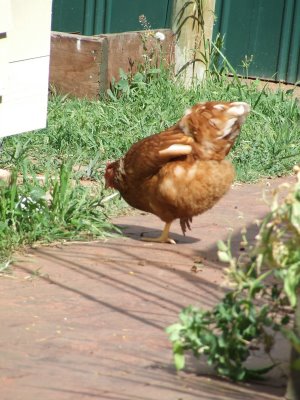 All four hens had a good look around at first and found some bugs, ate grass, scratched around the clothesline, and generally enjoyed the wide open space. Then they spied the garden bed, in which the purple podded peas are on their last legs. Then the fun started. They found that the beds were nice and dry, and could be dug in very easily. It was if they were digging to China. They found so many worms, and other insects that every time I looked up at them, they had something dangling out of their mouths.

Once all the worms/bugs had been consumed, it was time for a well earned dust bath. Bunty lead the way and was covered in dust and compost. The other three soon joined in as you can see below. 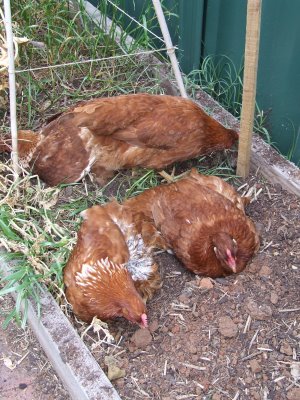 It was about now that I decided it was time to pick all of the remaining peas. Some were already dry, which I will use for next years crop, but the majority were edible. The chooks were unperturbed by me rustling through the dried pea plants, in fact they were curious as to what I was doing. 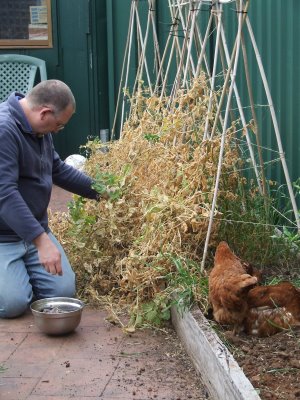 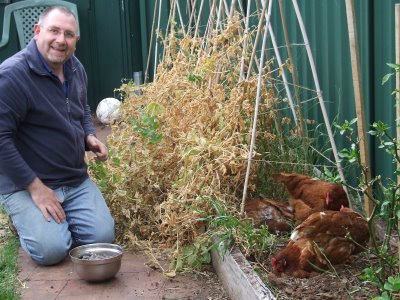 Ben decided to get into the act. 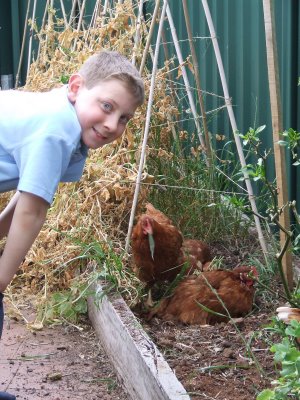 Once the dust bath was over, they all decided to do a little more exploring. They went back onto the grassed area and tested the boundaries of the yard. No harm done, and once they figured there was a 5ft fence protecting them, they continued about their business. 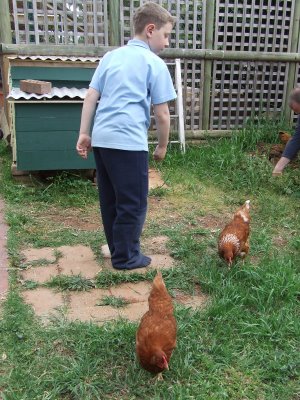 Not once did any of them try to fly, or run away. They are obviously very content little chickens. 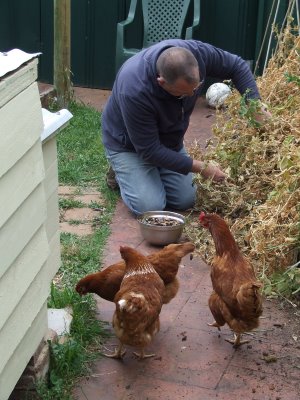 Ben made sure that they didn’t venture too far, as he had set up an elaborate system of obstacles, should any chicken attempt to make a run for it. That will stop them Eco Boy! 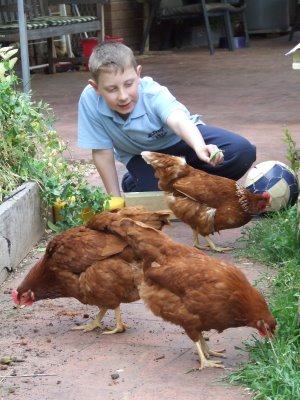 It was about now they decided that they had enough fun for one day, and it was time to go back to the coop. I have no idea what prompted them to return to the coop, maybe it is instinct. I did read in one of my chook books, that they seek the comfort and security of their home when it starts getting dark, which is why I suppose, they go into their house all by themselves each night. Once again Bunty lead the charge, Polly in second and with Edwina and Ginger bringing up the rear. All I had to do was shut the gate to the coop behind them. Kim took some video footage of them going back into their coop, so I will put together a short movie and post it in the next few hours. It was very entertaining to watch the parade in action.

After all of that chook watching and pea picking, it was time to go inside and cook dinner. I made Minestrone soup in the pressure cooker which turned out great. I will post the recipe in a few days, because it is such a hit with our family that Pam actually took a copy of the recipe back to England to try out during her next dinner party. Whilst the dinner was cooking, I shelled all of the peas. Here is the end result, noting that we have already had one feed of these delicious little green balls about two weeks ago. The peas in the jar dried out on the bush, so they will be planted out next season. 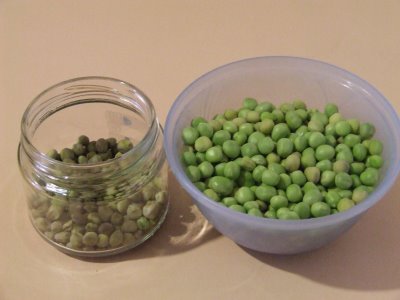 The peas in the bowl will be frozen tonight after a quick blanch. They should be enough for the next roast dinner. I realise that growing peas do not produce very rewarding crop size, however the benefits to the soil outweigh the small crop and so do the display of flowers. I will plant more peas next winter as per my crop rotation schedule. I plan to cut the plants off at ground level on the weekend, and leave all of the roots to rot and release their bounty of nitrogen into the soil. 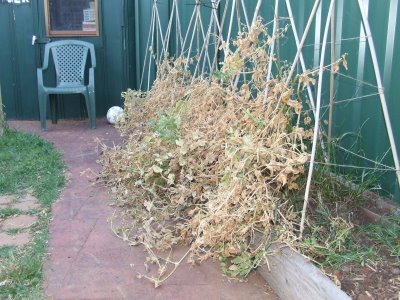 It was a great afternoon, and we have decided to let them out most nights on the days that I work from home, and during the weekend. Only in the afternoon though, after they have laid their eggs. That way, we won’t find any hidden treasures a few weeks later.

Well done girls on your first big day out. All the family really enjoyed your company. In fact, Kim actually touched one of the girls today for the first time, and she was very brave for a city girl. Edwina was very accommodating of course!