This post is not really a green one, a bit out there, and is about the pain management session I attended today.

My work approved 5 sessions of pain management as part of Workcover, because my back injury has been persisting for over a year now. Last Friday, I visited a lovely lady called Susie Rotch, who is a Psychologist and one of her specialties is pain management via self hypnosis. We had a great hour long session and I went through the process of explaining how the injury happened, what has taken place over the course of the year, my sustainable lifestyle and family, and some other personal stuff that I won’t go into.

Well, today was my first real session of hypnotherapy. I was pretty excited to get going, and Susie had asked me to bring a blank audio cassette to record the session on, so that I could play it back every day for a week. Luckily, I have an old tape player in the shed, which has a headphone outlet. I should be able to connect it to my PC and convert the session to an MP3 to transfer to my iPod. This way, I can listen to is anywhere I like, instead of carrying a huge boom box around on my shoulder, just like back in the late 70’s!

The session kind of felt like this. I was asked to sit in a comfy chair, and get comfortable straight away, which worried me a little because I only have a sitting tolerance of about 10-15 minutes before pain starts travelling down my legs. I was specifically told to put a pillow behind my head in case I got into a deep trance-like state, and thank goodness I did (more on that later).

Susie started the session by asking me to close my eyes, and began to guide me through to a hypnotic state by describing the calmness of sitting on a river bank or the sea shore, and listening to the water moving back and forth on the shore. I could feel the sand sift through my fingers when she described it, and I began to become so relaxed, but was fully aware of where I was and what I was doing. I was so relaxed that my head fell back and hit the pillow instead of the wall. Great suggestion, and obviously one she had experienced before.

She told me to touch the area that hurt the most, which I did with my hand and began to rub the area where the injury was. There was a suggestion that the simple act of rubbing the painful area would help change the feeling of pain into something else. Would you believe that my back and legs, where most of the pain usually is started to get really warm. I kept thinking that this is fantastic, and I was experiencing an different sensation that was good and not bad, as it previously had been when I walked into her office!

As I began to go deeper, she talked about a boy, who being unaware how, could control the pain in his body by imagining a door in his mind that led to a hallway. In the hallway there were switches that coincided with various parts of the body. I walked down the hallway and actually saw the switches to areas that I feel nearly constant pain in, and nearly reached up physically and turned them off. I think that boy might have been me! When I turned off the switch marked L5/S1 disc bulge (there was actually a switch in my mind with that label on it!), that area started to get warmer still and the pain faded even more. I then turned off the switches to the buttocks and both upper parts of my legs, and they too became warmer and pain faded.

Susie brought me to an awakening state with my eyes open, but then told me to close them again and put me back deep under again with her calming words. She said that with practice I could achieve this sensation simply by closing my eyes and concentrating on the painful area, and that the warm sensation would return for as long as I liked. She also mentioned something about healing, but I will have to listen again tomorrow because my mind was so excited with the fact that the pain was different, I think I missed what she suggested. I was then brought to a full awakened state slowly, and the session was over.

I thanked her for a most extraordinary experience that I had never encountered in my life, and upon that I quick glanced at the clock. 35 minutes had gone by, and here was I thinking that I had only spent about 10 minutes under hypnosis. Bloody amazing that the concept of time is very skewed when in a deep trance.

On the way home on the train, I tried to practice by going over what she said in my head, and managed to sit down for part of the way relatively pain free. I did keep getting interrupted by some old drunk sitting across to me talking crap to the bloke next to him, but better he be on the train than attempting to drive home from the city! At least when I listen to the tape again tomorrow, I will be in the peace and quite of my wonderful garden.

I have 3 more sessions, which I am so looking forward to. I can’t wait to see what happens next Tuesday, and will be practicing throwing those switches in my mind every day until then. The power of the mind is an amazing thing, especially the suggestive and subconscious parts of it. I thought that meditation was cool, but for an experience, this takes simple relaxation techniques to a whole new level. Susie mentioned that the two techniques kind of overlapped in their methods but meditation was mainly for relaxation, and hypnosis can be used to heal, change behaviours, and reduce or eliminate pain. Both techniques apparently tap similar parts of the mind.

Anyway, I will tell you all about my next vision quest/healing session next week. I believe it will be as wacky as this one, but hey, it worked for me! Here is something that I think is equally funny on the subject to finish off the post today. I found it in an old newspaper. Click on the image to enlarge. Enjoy, and may your mind be clear when you need it most! 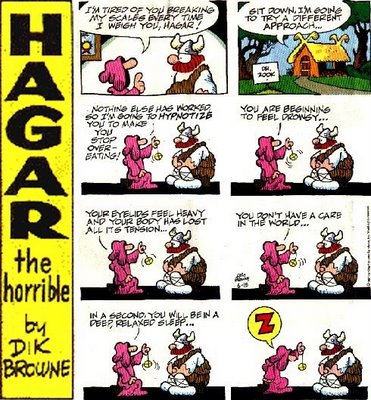