What a wonderful day!

Got out of bed at about 0900 after a nice sleep-in. Kim made me a bacon, egg and mushroom sandwich, which was really yummy, and the two out of four kids that were at home gave me their presents which were wrapped in newspaper. Ben gave me some stuff that he bought at his school’s fathers day stall. Some degreaser, raw plug and screws, a picture frame (which Kim is placing a picture of Ben and I in it), and a diary for 2009, all which will come in handy. Good on ya Ben, great work!

Megan gave me a book, “Burke’s Backyard – Homegrown, gardening and cooking for good health and great taste”. It is a great read, and I wish I had something similar when I was first starting out. Not only does it have how, where and when various fruit and vegetables grow in OZ, it also has a couple of recipes per plant. Thanks Megan, a gift I shall always cherish.

Pam gave me a block of Rum and raisin chocolate. She didn’t have to, but did anyway. It must have been son-in-law’s day as well???

After the presents, I then got ready to take Pam (Kim’s mum) to the doctors. She has been unwell since Friday, and has spent the last two days in bed with a extremely bad cough. She was in a fair bit of pain as well. After quite a while being treated, she was given a real good examination by Kim’s doctor, Mark Robson. We all think that he is one of the best doctors in Melton. Great bedside manner (besides my GP of course, Doug). Anyway, Pam has a very bad chest infection and pleurisy, and while she was in the doctors office, she had to have a nebulizer to open up her airways. She was given heaps of medication and has a follow-up appointment on Wednesday to check on her progress. We are all hoping for a speedy recovery, so that she can start to enjoy her visit with us. She flys back to the UK in October.

Whilst Kim and Pam were seeing the doctor, Ben and I walked around to NQR to scope out any bargains for the stockpile cupboard. I bought the biggest pumpkin for $3, great to make pumpkin soup with. It must have weighed about 5kg. I picked up some stuffed green olives, one jar with garlic and another with jalepenos, which I had a few with lunch. Wicked stuff. Ben got himself a bag of chips and a packet of fizzy lollies that will last him about three weeks (not!) I also bought some Thomas Chipman organic chips for Kim and I as a treat. We don’t buy ourselves many treats and only have one a week. We figure that with all the home cooked meals we make out of fresh ingredients, one bag of chips are not going to a. break the bank, and b. kill us! In summary, Ben and I spent a grand total of $12. We walked back to the doctors and Ben asked me many questions about the Hybrid. I gave answers that he could understand, and opened the hood and showed him the engine and where the in-line electric engine attaches to the battery bank behind the back seat. It was then I found the radiator cap only half locked down, and coolant splashes everywhere. It looks like the mechanic didn’t lock the cap down when he did the 40,000km service last week. Thank goodness there was still some coolant in the radiator, and that the engine didn’t fry. I shall be giving them a call tomorrow, to voice my dissatisfaction with their shoddy workmanship.

I then called my Dad, and caught up on all the goss up in Queensland for about 20 minutes. He is spending lunch with my brother Jim, and having a relaxing afternoon. Enjoy your day Dad!

We picked up Amy on the way home as her train arrived just as Kim and Pam finished at the doctors. Amy had been to her boyfriends, sisters wedding, that was held yesterday. Congratulations Molly. We had to go to the chemist to fill Pams’ scripts. Instead of perusing all of the consumeristic rubbish that so many of our shopping centres have in them, I just sat a waited for them, and Amy and Ben went to Kmart to see what hours she had for this week. Ben got to see the secret staff room, and was very excited about that!

We got home at about 1330, and I had some of my olives and a few dill cucumbers for lunch with a nice cup of rooibos tea which contains no caffeine (which gives me headaches) and lots of antioxidants. I then giggled myself silly by continuing to read “Crap at the Environment”. I am about half way through and it is such a great story. It is so funny that I belly laugh at just about every page. I have been getting some very odd looks from my fellow passengers on the train this week as well, because when I laugh, it is rather loud, and at one stage had tears streaming down my cheeks because I was laughing so hard. It is fun being me!

Amy gave me her present, which were the old faithful Grosby slippers. I get one pair from her every fathers day, which is good, because by the time the day comes around each year, the pair I have are so worn they are just about falling off my feet. I wear them like a second skin, and bung them on as soon as I walk through the front door. I have even been caught gardening in them because they are just so comfortable! As always Amy, a great present.

Kim also made me a present. It is a miniature vegetable patch! Here are some photos. 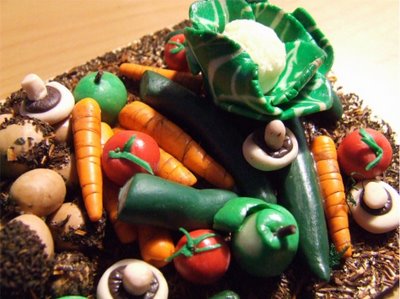 Here is another view. 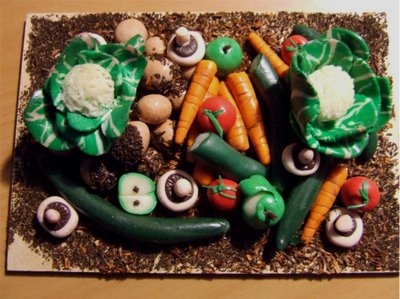 And finally, in its little display box. 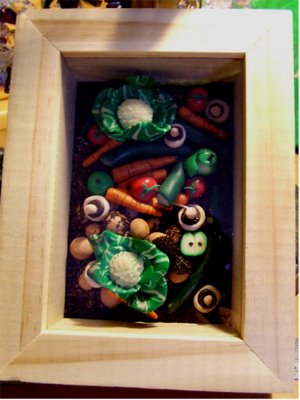 She makes them out of polymer clay, and is a very clever bunny! The dirt is made from tea leaves, and the cauliflower and apple actually glow in the dark! They all look so real, I could just eat them all up. She certainly has a talent and the minature vegetable box takes pride of place on my computer desk.

Kim, we are all still waiting for your next blog entry. Lets not disappoint the readers. You started off with a bang and now silence. Readers, leave a comment if you would like another crafty or frugal post from Kim. Treat it as a petition and maybe with some home grown activism, we may convince her to write another post!

Kim is cooking my favourite English fare for dinner tonight, Shepard’s pie. I contributed the peas for it from the garden. Simple food is always the best, and I just love Shepard’s pie! Adam and his girlfriend Stacey are coming over for dinner, so Kim is making two big dishes of the pie. Enough for a small eco-army, me thinks.

The rest of the evening will be spent with the kids, and talking about the sorts of things we like to talk about. There is no better way to spend the day than spending time with your kids. Thank goodness for a simple life.

[P.S] Adam and Stacey gave me a funny card, and a Bunnings voucher for $50. Now I have the means to buy the chicken wire I have been after. Freecycle still hasn’t come through with the good! Thanks Adam & Stacey, nice gift.