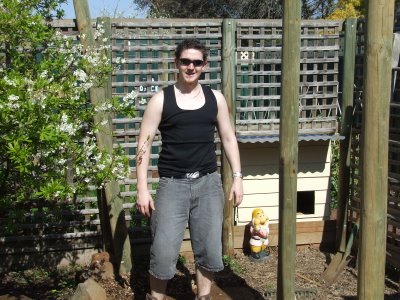 This weekend was a busy one. As mentioned in the previous post, Adam gave up some of his time, and helped me with the continuing construction of the chicken house. He has been working out at the gym, so is going to put all of those hard earned muscles to good use. It has been a long journey, making this chook house, with the decision made in late April and construction starting in late May. All of these delays have been due to my slow recovery from a very persistent bulging disc.

If you would like to get up to date on what we have accomplished so far, have a read of “Chateau le Poulet” , “The Chook House“, “Paint The Town Green“, and “Coop de Ville” in order of chronological events.

On Saturday, at about 10am, I got all of the tools out of the shed that I thought that we would need over the course of the weekend. Adam turned up on his new bike at about noon, and we got stuck into it. First he had to dig another hole, as Kim thought it would be a good idea if the floor area was a bit bigger. We agreed on an L shape, which extends the cage up to the plum tree. That way, any fallen fruit that drops in the cage will be a welcome delight for the girls and it gives them another square metre to scratch around in. We went firstly to Bunnings to pick up a few things. A bag of quickset concrete, gate hinges, bolts, a latch to secure the gate, and some shade cloth fasteners. Here is a photo of Adam digging the hole for the extra post. Click on any of the images to enlarge. 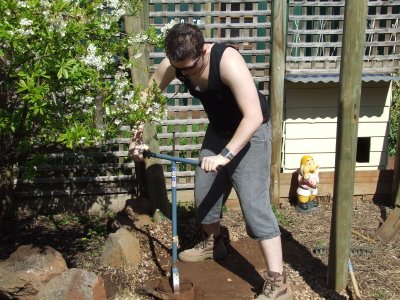 Once the post was in and quickset concrete used to fix it in the ground, we began to put the bottom part of the fencing together. We used the scavenged plastic electrical conduit covers and nailed them into space. Then we put most of the frame together from the wood that I had also found. That took a while, as we made sure everything was level, and fixed it all together with cup bolts, nuts and washers. At the end of day one, we still needed 5 lengths of wood to finish off the frame. Looks like I had to go for another scrounge in the morning. We tidyed up the area, and backfilled the bottom boards with stone so that we were ready to go the next day. Here is the proud father with his workers. 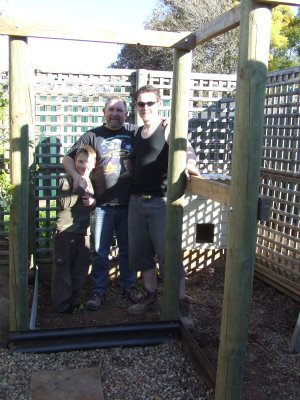 After the photo shoot, as it was a hot day, I shouted Adam one of my thirst quenching Canadian Blonde beers that we made in February. That beer was oh so good. Kim, Butch and Pam decided to join us and we all relaxed for a while before Adam headed off to a 21st birthday party. We agreed on a noon start the next day, just in case he had a big night! Here is a snap of Butch and Pam relaxing. 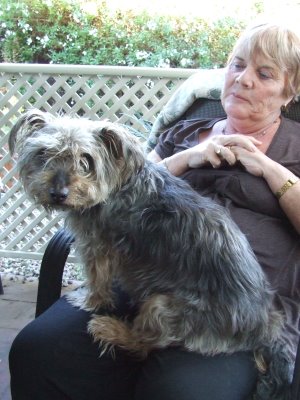 It’s a good life for some! I was knackered and had been badgered all day by Kim and Pam telling me not to over do it. It was the first real work I had performed since my second relapse. I didn’t hurt very much, because I took their advice and didn’t blow and ‘O’ ring. Early to bed with an early start planned for Sunday.

Up at 7am on Sunday, and went hunting for some more wood from the scrap heaps on the building sites just up the road. I found what I was after within an hour, and it back home to have some breakfast and set up for the day. Kim and I popped back to Bunnings and bought two lavender bushes to plant in or around the hen house. Apparently it stops leg mites. I also bought some hormone powder to propagate some rosemary cuttings that we will also plant in the cage. It is reported to keep the chooks healthy. Adam turned up at about 12.30 pm and didn’t look too worse for wear from the previous night, so we got stuck into it straight away. We finished off the frame in about an hour and a half. Here is the end result including the support for the roof. 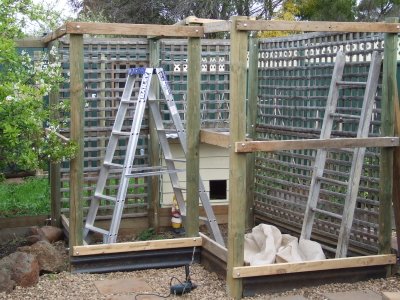 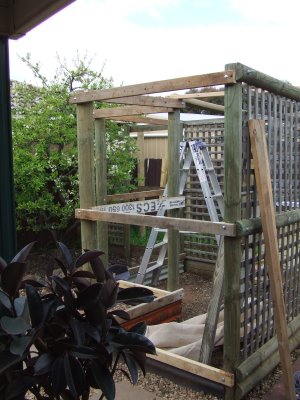 The next job was to put up the shade cloth over the long section. You may recall that I found a nice length of shade cloth on one of my scavenging runs. Having never put shade cloth up before, we just followed the instructions on the back of the packet that the fasteners came in. It was pretty simple once we got started. Amy was home from work, so she came out and gave us a hand. It was nice and tight upon completion and cuts down a lot of heat and glare. It will keep it just a little bit cooler for the girls in the hot summer days we get here in Melton. 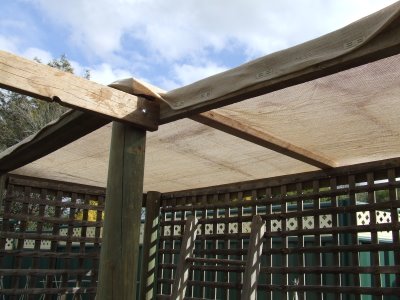 Now it was onto putting on the chicken wire. We figure that the trellis that is already in place will stay, and should be good enough to keep the hens secure. We only had to do the remaining panels and the gate, which was yet to be built. Adam was very eager to begin with the wire! Note the gloves. We both wore them at this stage of the construction. It must have been our sensitive I.T. hands! 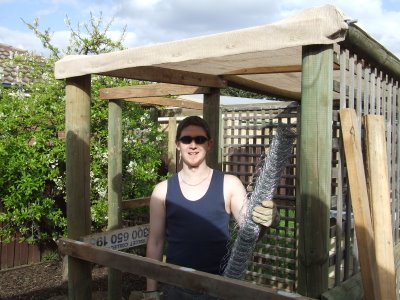 We began fixing the wire on to the inside of the frame with fencing pins. They are buggers to hammer in, and many were dropped by the time we finished for the day. I did the worked on the top and Adam did the bottom. It took us until about 4.30pm when we called it a day. Here is where we got to. 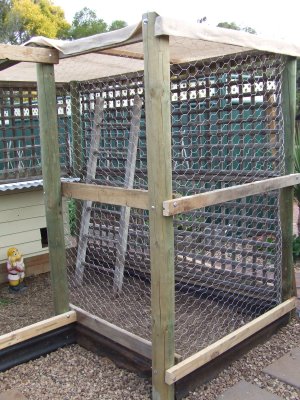 I hope the pallet blokes don’t come looking for their pallet! 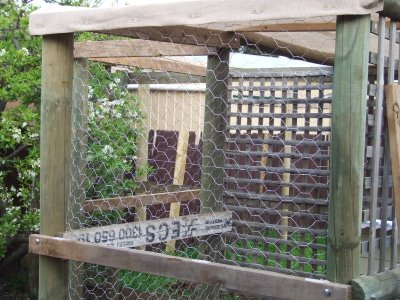 We still have one side to do, and have to construct the gate. I plan on putting the gate frame together after work, over the next few days. It should be ready by the weekend so that Adam can return and help me hang it. This is where the gate will go. 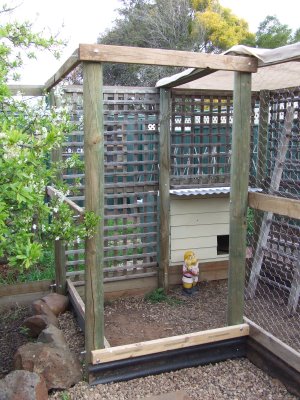 Now if I was a chook, this is the view I would have from the inside looking out. Consider it a ‘chooks eye view’. Nice digs, I reckon. 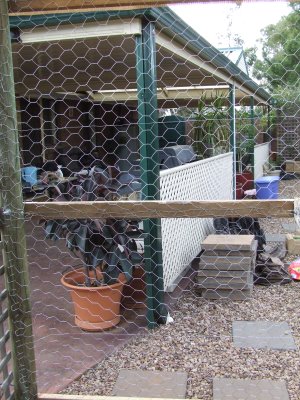 And a view toward the new passionfruit vines we planted a couple of weeks ago. 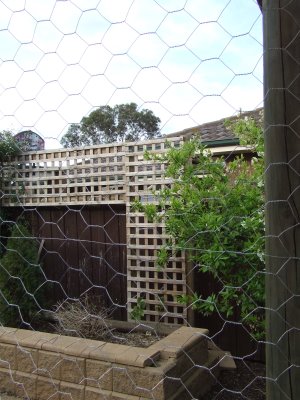 They are just going to love living here. 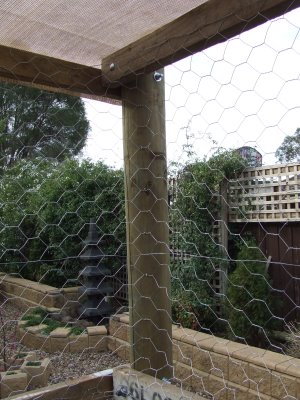 Of course, what would a day like this be without a road test. Here is Butch in the cage, looking very perplexed! He thought he was stuck until I went in through the whopping great hole where the gate will be, and then he figured it out. 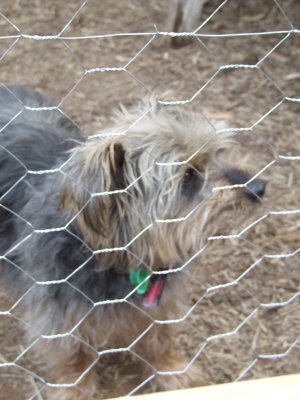 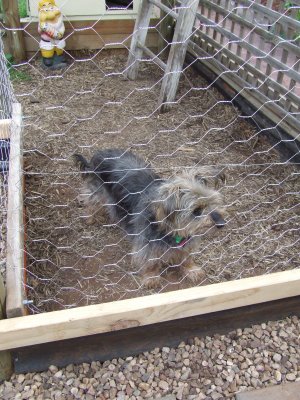 After the escape, he looked very relieved! No Butch, the cage is not for you. 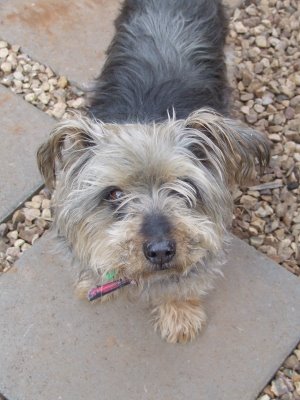 I plan to have the remainder finished whilst I am on leave next week, and we are going to paint the exposed framework Heritage Green. It should protect the wood for a few years at least. I enquired about getting some Pekin Bantams from Book A Chook today, and I was told that there is a 10-12 week waiting list for 6 week old chooks. I put my name down on the list, but will have a look around to see if we can source some girls a little earlier. I would love to have them before Pam leaves in the first week of October. Time will tell. If anyone knows of any chicken breeders in the western part of the greater Melbourne area, or around Melton/Bacchus Marsh/Ballarat area, drop me a comment please. It would be great to get them settled in sooner than later.

A great weekends work, with just one more weekend to go until we are finished. It must be the longest chook house build in history!