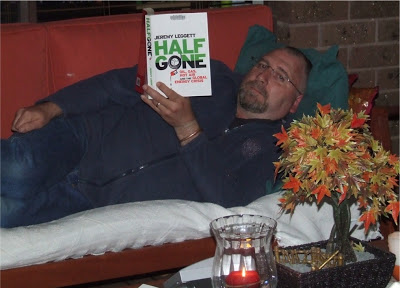 It has been a while since I have written about the sustainable stuff we have been doing around the home, so I thought I would give everyone an update.

Only 14 days after I drained the rainwater tank, and having rained all day yesterday, it is again full to the brim. 2300 litres of clean, fresh rainwater. Not that the garden needs it at the moment, as everything has had a very big drink. It feels good to have a full tank again.

All of the vegetables are growing well, and I swear that the broad beans have grown another 20 cm in a week. Once they establish their root systems, they grow like crazy. The slugs are still having a feast on the bok choy. I watched an episode of Gardening Australia, and they mentioned that you can get rid of slugs and snails by using one part espresso coffee to five parts water and spray it where you think the slippery suckers are and they should be dead by morning. You must re-apply after rain and heavy watering. I will give it a go tomorrow, when it dries out a bit more.

I tied string in layers around all of the pea pyramids so that they would have something to grab onto. They all look like little Eiffel Towers now! The plants were starting to droop over the edge of the bed onto the path, so I hope it works. I picked the last two eggplants of the summer season, but there are flowers all over the bush again, so I will see what happens. Most of the chillies are now red, so I will pick and pickle some of them next weekend, and try and dry the rest in the oven to make chilli flakes. I have been using capsicums during the week when they get big enough to eat. They have slowed down due to the colder weather, and I have yet to see one go red yet!

The compost is going well and I should have at least five wheelbarrow loads ready for summer. Two of the compost bins are being turned each week, with the large Aerobin being added to from the kitchen and garden waste. The worms have really slowed down in their food consumption. They must not get as hungry in the winter?

No start on the Chook house yet, because of the rain, but will get stuck into it next weekend. I can’t wait, but at least I have most of the materials except the chicken wire and a few posts. Adam and Kim have promised me that, weather being kind, we will start building in a weeks time.

As it has been very cloudy over the last month, so we have not been producing much solar electricity. Our total usage per day over the last month has been 13.7 kWh, of which 58.6% has been made by the sun and 41.4% drawn from the grid. On sunny days we make about 10-12 kWh and on cloudy days, when your body does not cast a sharp shadow, we make about 2-4 kWh per day. It is pretty hard to make excess electricity in winter, unless you have a bigger solar array, because of the reduced daylight hours, and weather. Still it is better than using coal fired power! Our last power bill from Jan-Mar was $160.02. Compared that cost to the same billing period last year which was $726.35. Quite a difference with energy efficiency measures and solar PV!

Our natural gas usage has climbed due to heating. We have built in space heaters in two rooms of the house, but we only use the one closest to the kids bedrooms. We try and keep the house temperature between 16-19 degrees. We only have the heater on for about an hour in the evening to heat the house up when it it has been cloudy. This is because we try and use passive solar when the sun is available. It works most of the time, and because I have draft proofed the doors and the windows have good seals, the temperature is constant most of the time. Over the last month we have been using an average of 48Mj of gas per day. As there is less sunshine the solar hot water is not as efficient, so we use more gas to heat water. We also have been cooking more hot meals, and as mentioned before, heating the house when it gets really cold. On comparison, we only have a daily average of 20Mj in the summer months. Our last gas bill was $43 with most of it being the quarterly connection fee.

Our water usage is about constant at about 490 litres a day. As I may have mentioned before, we have six people living in our house, so that is 81.6 litres per person per day. It seams excessive to me, seeing that we have dual flush toilets, low flow shower heads, and only use rainwater for the garden. I think that the washing machine uses a lot per wash as we have a top loader, but we use eco mode where we can, which skips a rinse cycle, and use the grey water on the non-vegetable garden beds. When the washing machine gives up the ghost, we will be buying an efficient front loading washing machine with the maximum star rating. We have been saving for another tank so that we can plumb it to the washing machine and main toilet, and I think that it will have to be at least 5000 litres for it to last for a while. The dishwasher only gets put on once a day when full.

Kim and I went food shopping today, and committed our first eco sin in a long while. When we got to the shops we discovered that we had left all of our reusable shopping bags at home. We had to revert to plastic, which felt really bad. At least they will get a second use with the dog being active as he is! We only bought one meat product, which was some lean pork, and some fish, that we will have for dinner one evening, with the rest being made up of vegetarian meals. We have really come to enjoy this sort of food, with its so many varieties. I don’t know why we didn’t do this earlier. Because we have cut back on meat, not only has our grocery bill gone down by about $40 a week, but our ecological foot print has been reduced.

Not much else going on besides trying to keep sane in an otherwise crazy world, and doing our best to use as little resources as we can. To finish off today, I found this oh so true quote whilst looking through some blog comments yesterday. It struck a chord with me.

Keep keen, and keep on being green!